Late Autumn can be among the most prolific times of year for commercial fishing as the fish get there heads down in earnest in readiness for a long cold winter. However, it is also a time of year when it is most wise for anglers to read conditions carefully, and adapt to conditions. Often cold nights and clear water mean anglers who plan their attack, and consider their options carefully reap the rewards at the end of five hours.

Often at this time of year, you will find that sessions start off slowly, and then improve as the day wears on. Whether this is due to diminishing light levels in the afternoon, or improvements in temperature I am not too sure, but I see far too many anglers blow their peg before this key time, or simply giving up and so denying themselves the chance of a late surge. My way of fishing is all about keeping yourself in the race, while giving yourself every chance of a big weight if and when the fish switch on...

The Power Of Pinging... 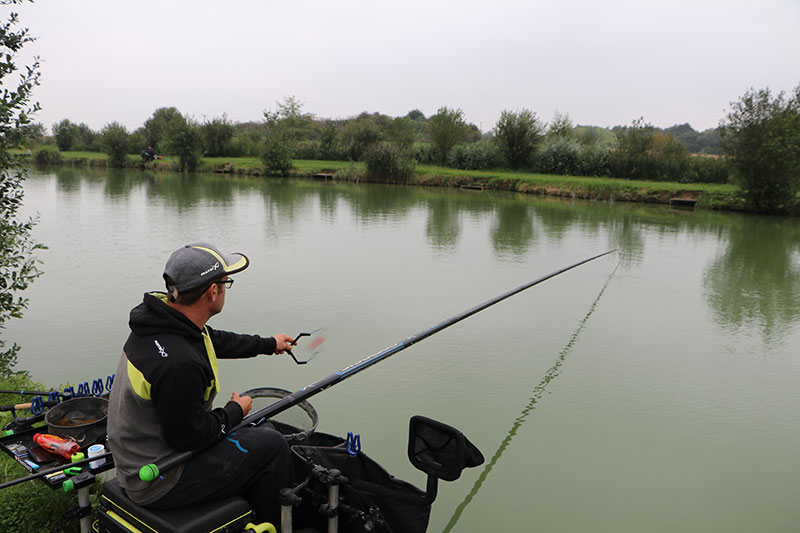 Pinging pellets will attract fish at this time of year

As I explained, at the forefront of my mind in the Autumn is the idea that the fishing will start hard then get better as the day wears on. For this reason, I find feeding cautiously to be the best way to go as opposed to potting in a lot of bait at the outset then waiting for the fish to turn up. In fact, my favourite way to feed is by catapult, as this allows you to present a small amount of bait where you want it, but with the added advantage of fish-attracting noise as your bait hits the water. 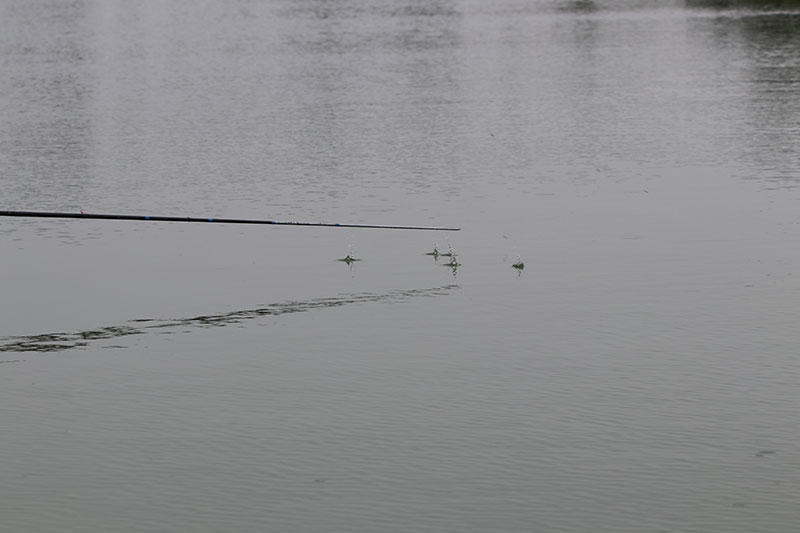 I feed the Spotted Fin 4mm pellets, starting off feeding three pellets then gauging my response based on how my peg reacts. Now to explain the crux of this feature - how I fish my peg and why.

Spare The Rod, Spoil The Peg!

The key thing that I do differently to most people is fish a small Feeder instead of a pole rig on the bottom. I still set a pole up, but this is kept exclusively for fishing up in the water. In essence I fish a small pellet feeder at 14.5m, then fish a shallow rig over the top of it.

There are many advantages to this sort of approach, especially at this time of year. The inline feeder is great because it massively reduces the number of foul hooked fish that you encounter. Because there is no shadow of the pole on the water while you are fishing the feeder, I also believe that the fish will come in more confidently and ultimately feed more positively also.

Often I find that after a steady start on the feeder, I am able to switch to the shallow rig and enjoy a sudden burst of fish that have sat confidently in the lee of where I have been pinging. The key is often to take these easy fish then get back on the feeder when the action slows, and hopefully repeat the process.

In terms of tackle for this shallow line, things are kept robust but balanced. With the water clearing I wouldn't want to fish too heavy, but by the same token it is important to respect the size of the fish that you are fishing for and the fact that you may have to put a big weight together quickly. 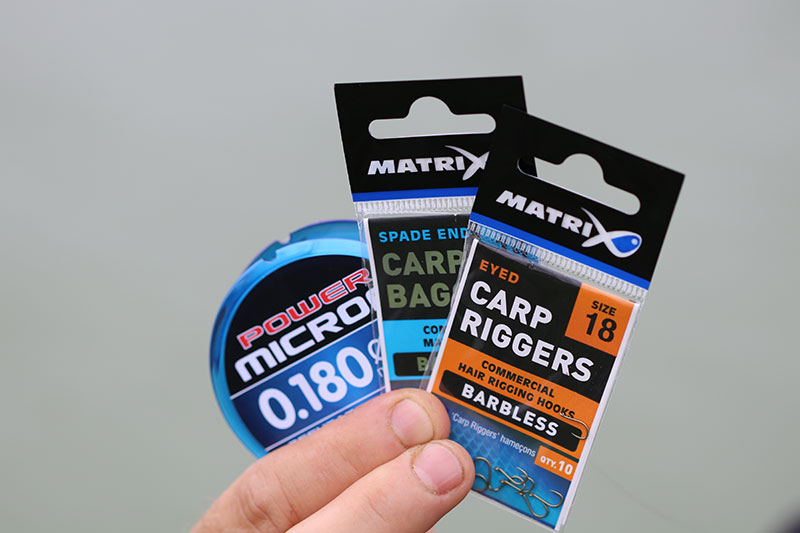 Robust tackle is used on the pole and feeder

For this reason, I match 0.18mm Power Micron mainline to a 0.14mm hooklength on the shallow rig. Shotting is a simple bulk of No10 shot at the top of the hooklength, so that when I slap my rig I get three distinctive plops on the water, one from my bulk, one from my pellet and one from the float. Hookbait is a 6mm pellet hair rigged on a micro band. 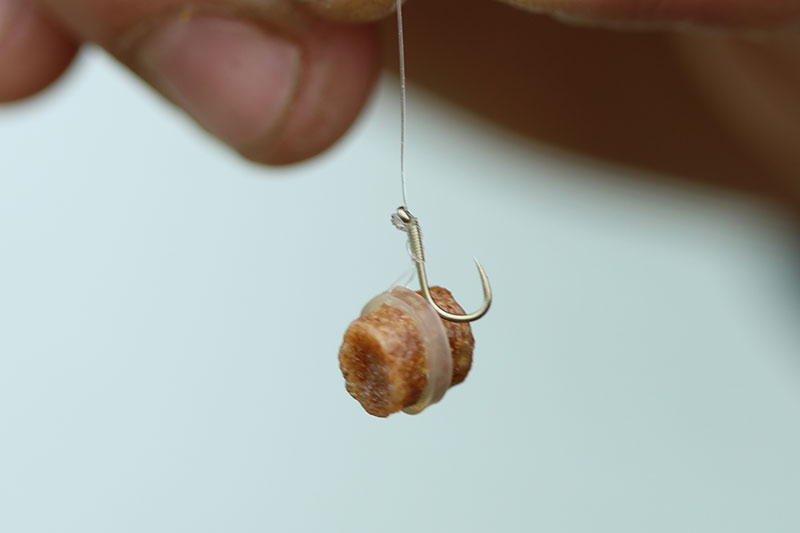 Again, I can't stress enough the importance of timing and discipline on this line, if you get regular bites, stick with it. If you don't, come off if and go back on the feeder, as while ever you are fishing the Feeder you can be priming this shallow line more effectively for the next time you try it.

When it comes to my pellet feeder set up, there are two distinct aspects of my attack that give me an advantage. The first is the rod. I use one of the Matrix 8ft Carp Master rods. Not only does the short length of the blank make accurate casting at such a short distance easy, but also because it’s such a short tool, fish tend to pop up very close to you at the netting stage - and big fish can be landed quickly.

Feeder wise, its one of the 35g Evolution Pellet Feeders for me today. These hold just enough bait to attract fish into the peg and obtain a quick bite. 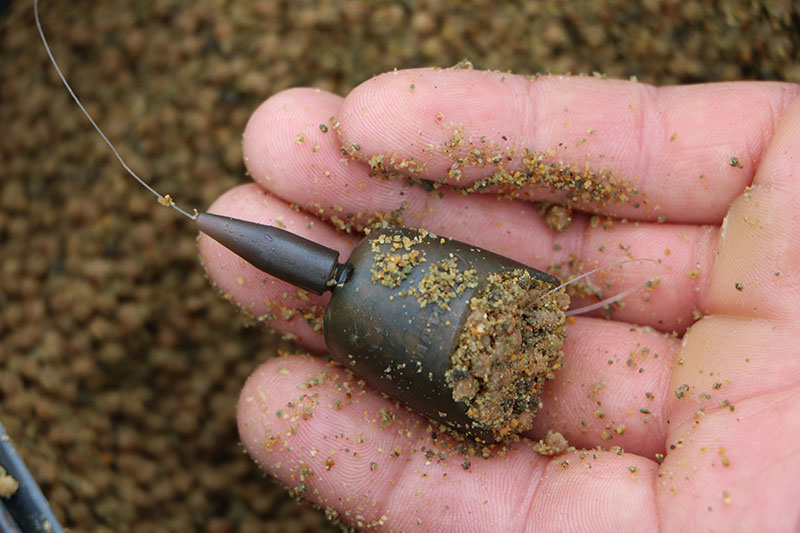 A groundbait and pellet mix are loaded into the Pellet Feeder

I load them with a 50/50 mix of dampened micro pellets and groundbait, so there are some particles to keep the fish grubbing around but also some cloud as the feeder falls through the water just to entice the fish down to the bottom.

Hook choice is important - I use one of the size 16 Matrix Carp Riggers complete with a banded hair rig. To this I either band a 6mm hard pellet, or one of the Spotted Fin Go2 Fluro Wafters which make a great change bait at times. 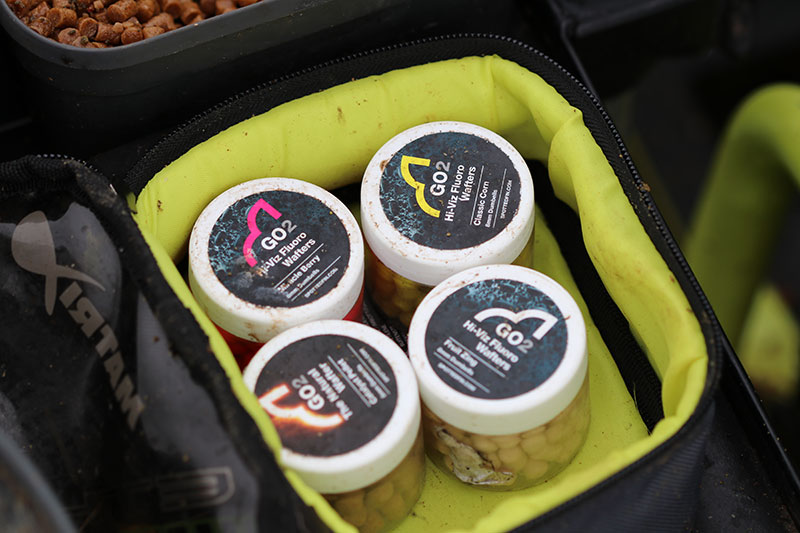 Wafters are a great winter bait on the pellet feeder

In terms of hooklength diameter, its no nonsense 0.18mm Power Micron, I don’t see any advantage in scaling down too much given the fact that hook length is generally camouflaged in your bait when you get your bite.

Unless I can actually see fish moving up in the water, I will always start my day on the feeder, while pinging three pellets over the top regularly as previously discussed. Often, you can get early fish in the net before other anglers have even finished feeding by starting your day like this.

If no bites are forthcoming, I will keep my eye out for any other indications on the tip, such as line bites which might betray where the fish are, and more importantly, how they are responding to the bait that I’m pinging in. If I get indications on the rod after I’ve fed, it suggests to me that the fish are in the bottom half of the water column so I’ll sit tight for a while on the feeder.

By contrast if there are no indications on the rod, but signs of fish moving higher up in the water (such as the odd swirl or fish topping) I’ll pick my shallow rig up.

Generally, I start about 18 inches deep on this, but will change regularly if I am getting bites so as to keep in touch with the fish. You will often find that the biggest, wariest fish are caught straight after you make a change in depth. 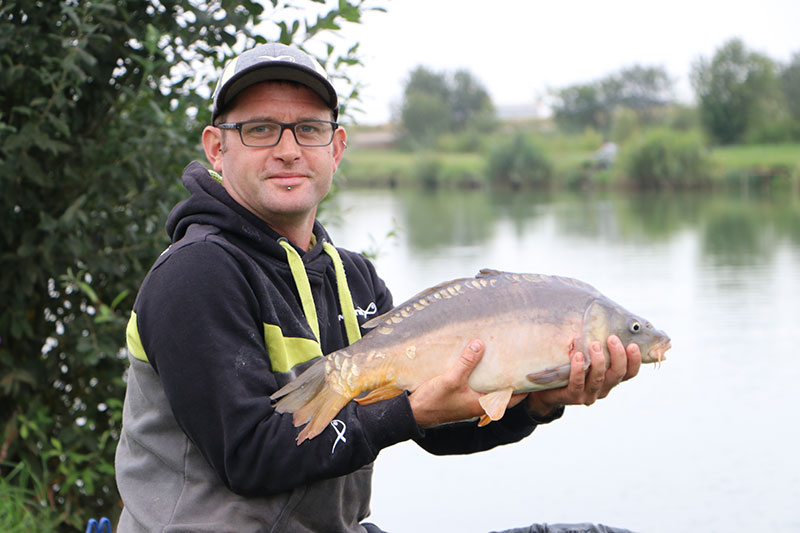 Bigger fish will fall to a change of depth

Todays session couldn’t have gone any more smoothly really as a couple of early fish on the feeder got me off to a nice start, but when indications dried up I felt sure the fish had risen up in the water to intercept the free offerings I was loose feeding. A quick look shallow brought a double figure fish straight away, then another slightly smaller sample followed. The fish weren’t happy to stay shallow though, and soon retreated back down in the water column where I was able to pick a couple of fish off. 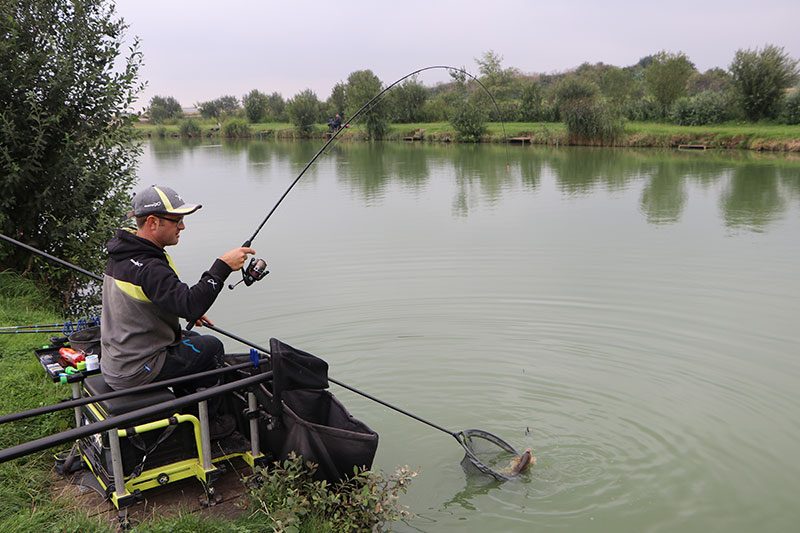 The feeder produced a couple of quick early fish

It is on days like this when this method really comes into its own, as you are able to give yourself the best chance of catching these fish without foul hooking them at two distinct spots in the water column.

This is also a particularly deadly tactic to keep in the locker for windy days, as the pellet feeder gives you optimum presentation where other anglers will struggle to hold their pole, and by switching to the shallow rig for a short spell in between gusts, you can often nick some really big fish too. 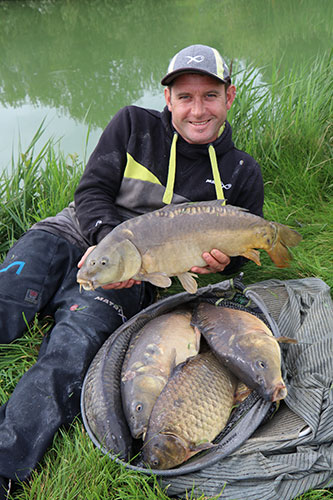