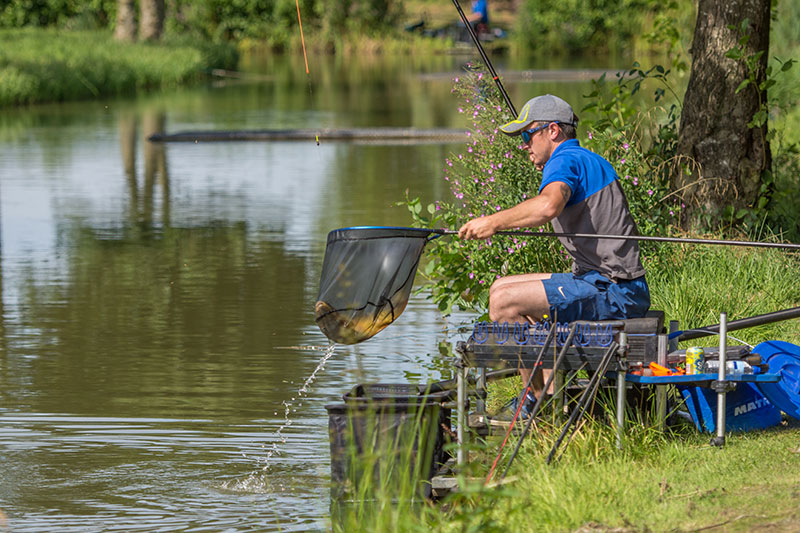 Do you ever find yourself fishing a certain method or tactic without putting much thought into it? Do you fish it the same way every time and then if you don’t catch simply put it down to there being no fish in the swim? If the answer to either of these questions is yes then read on as Lee Wright gives us an interesting insight into thinking more about your fishing.

I guess I’m what you’d call a thinking angler, I’m super critical and always looking to rationalise my fishing and work out why some things work, and some things don’t.

One area of my fishing I’ve put a lot of thought into recently is margin fishing. Now it’s no secret that I’m possibly best know for my exploits on natural waters, Rivers like the Soar, but I think a lot of the things you learn on natural waters can actually be transferred to commercials.

The one big thing I’ve always tried to do is think about how and why fish feed and this is one area I think a lot of anglers fishing commercials could possibly improve on. This style of thinking can be used for all methods of fishing, it’s not exclusive to margin fishing but that’s the area I want to look at today.

So how do YOU fish the margins? I’d guess that where allowed it would normally involve potting in big pots of groundbait or bait and then fishing over it? Is this wrong? No, after all go to most big matches and most people will be fishing the same way, but just because everyone does it doesn’t make it the best way of fishing.

When margin fishing I like to alter my feeding depending on the type of venue I’m fishing. On big, large, open water venues I think that potting in big pots of bait does work. I think on these types of venues the fish are out in the open water and only move in at certain times and if you don’t have the volume of bait to hold them then they can eat and quickly move on.

On smaller venues, especially snake lakes such as Makins where we are today, the fish are never going to be too far away and I think they naturally patrol the margins much more than the fish in larger lakes. In this instance I don’t think huge piles of bait are needed, in fact I think they actually put the fish off. On this type of venue I’ve found that feeding smaller particles and less quantity will actually produce more fish.

The baits I use for margin fishing are actually pretty similar to those I use on the rivers, maggots, casters, hemp and worms. I always carry a few pellets but I find that natural baits always work better for margin fish. Although I don’t feed masses of bait through a big cup I do still carry quite a bit of bait for two reasons. Firstly when the fish really arrive in numbers I’ll feed a small amount after every fish to keep them in the peg, this can result in getting through a decent amount in a 5 or 6-hour session. Secondly, I love feeding casters regularly by hand, I believe the noise of them hitting the water draws fish in better than any other bait and it also creates a larger area of bait for the fish to graze over, potting in small amounts over this area just helps the fish to home in on one area and find your hook bait. 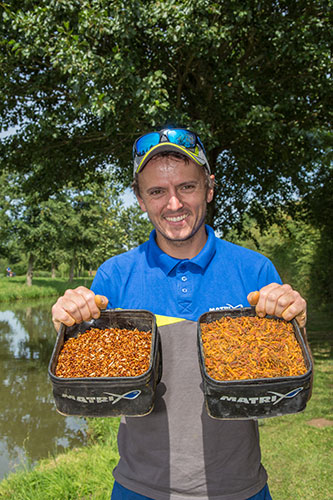 It’s all about particles when it comes to bait choice.

I mentioned earlier that I don’t like to feed big pots of groundbait on smaller venues, but that doesn’t mean I don’t feed groundbait. I still have faith in groundbait however I think that it’s always best to feed small balls that will go down and quickly break up leaving a very neat pile of bait rather than a big area of loose groundbait. The mix you use is down to personal preference but I think that one aspect of groundbait that is massively overlooked is colour. As I said fish in snake lakes can be hard to catch and can spook easily and I like my feed to attract the fish but not ring any alarm bells.

My thinking is that a pile of bright, obvious groundbait will spook some fish, so much like we do on rivers in winter I try to match the colour of my bait to the lake bottom. I do this by grabbing some silt or clay from the margins either with a pole cup or my hand if it’s fairly shallow, and then use various colours of groundbait to match the colour of the bottom. Using dark mixes, greens and bright orange I can match most bottoms and I also have an extra little trick. Most banks have molehills and I like to grab a few handfuls of this and add it to my mix. This not only helps match the colour of bottom but it also gives my mix a bit more weight getting it down to the bottom and keeping it there while the fish feed. 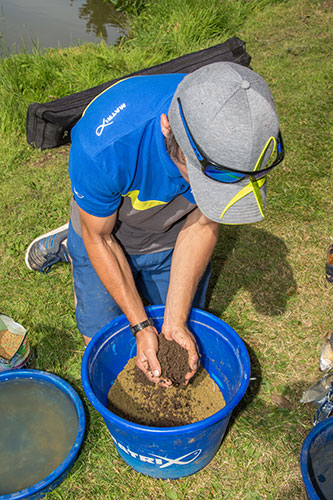 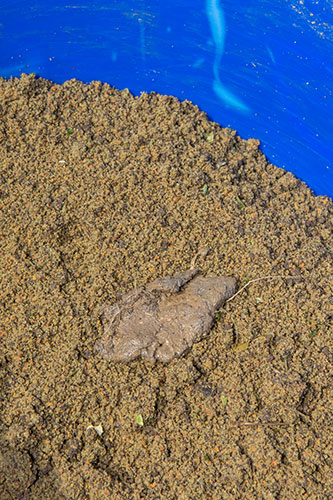 …..and helps it to blend in with the lake bed.

I also mix up a bag of Old Ghost Specimen Mix but I keep this separate and will often feed it with a bit of hemp and caster when I feel I need to kick a swim into life.

I don’t feel I can talk about margin fishing without also mentioning rigs, for some reason a lot of anglers fish with rigs in the margins they wouldn’t dream of using in other areas of their swim. You’re fishing for the same fish but just in a different area of your peg so why do people fish with massively over gunned tackle? I’m confident that I can land anything I hook on 0.14 Matrix Power Micron and a size 18 or 16 Carp Bagger hook. You’ll get far more bites than you would on 0.18 and a size 12 hook. I also balance my tackle and use a fairly light size 10 Stay Fresh Hollow elastic and a puller kit, which still gives you the control to land everything I could hook on a snake lake. 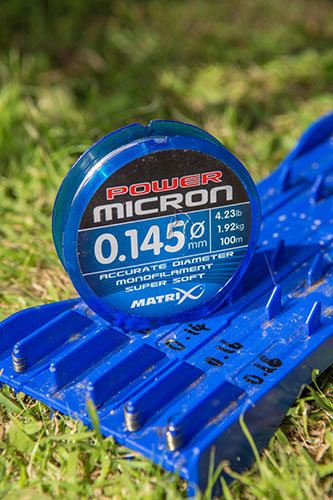 Just because you’re fishing the margins you don’t have to fish heavy.

I’ve picked a peg in the middle of the bank here on Phase 3 at Makins, it’s nothing spectacular but it does still have an attractive looking margin. I stake out my nets as I always do when I will be margin fishing and prepare my bait and rigs. I’m fishing to my right and after potting in a small amount of maggot, caster and a ball of groundbait I have my first look with a bunch of maggots. 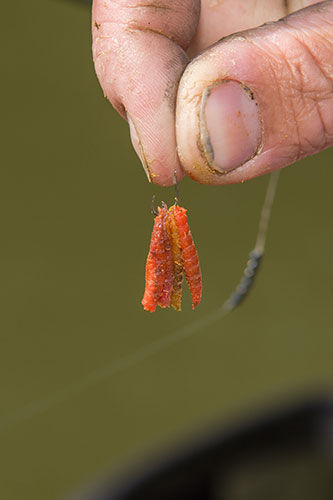 As I expect the first half an hour is pretty slow, mainly due to the disturbance of setting up. I keep feeding casters by hand and top up with a very small amount of bait every 15 minutes. 40 minutes in and I get my first bite. A quick lift of the pole sees several feet of bright orange elastic stream from the pole as a carp makes a bid for freedom. It doesn’t take long to get it under control though and soon a nice 4lb carp is beat. 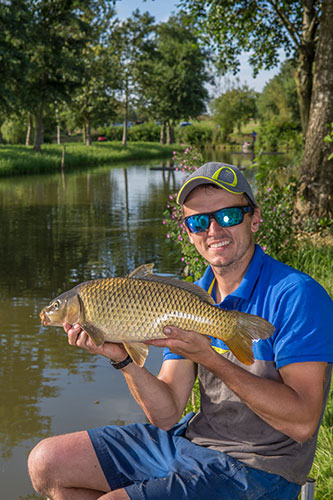 This hard fighting carp was the first of many to fall to Lee’s margin tactics.

I top up my swim and then keep the casters going in, I like to feed a decent amount every 5 minutes, feed too regular and the fish will start to come off the bottom making them hard to catch.

It takes around an hour and fifteen minutes to get the fish coming regularly but I’m soon catching well and I manage a couple of big fish over 5lb. Unfortunately the swim dies off around 3 hours into the session and I’m not sure why exactly but it could be something to do with a clumsy heavy footed photographer trying to sit next to my float!

After a bite less 20 minutes I decide to pot in some of the Old Ghost mix, it’s a really strong flavour and with a few casters added and some hemp I’m sure I can draw a few fish back.

I’ve also switch to fishing the head of two worms, they’re not much bigger than a couple of casters but I’ve found it to be a bait that works when all else fails. 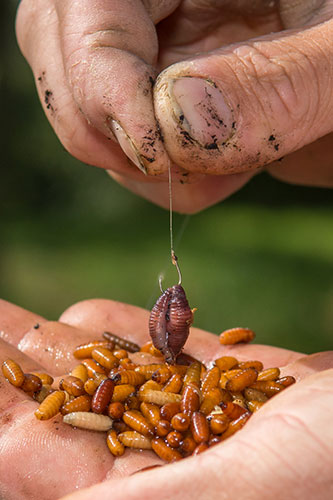 Double worm head – works when all else fails.

It takes just ten minutes to start getting a few indications and pretty soon I’m back into the fish. Worm seems to be working well but a switch to just two maggots on a size 18 ups my catch rate even further and I end the session with a flurry of activity.

I think I’ve had close to 75lb today and it’s been a great session. Feeding the smaller particles has certainly worked and with additional attraction of the casters fed by hand I’ve managed to get bites most of the day, from just one swim which isn’t always the easiest thing to do.

I think this has shown though that if you put some thought into your feeding and don’t just follow the crowd some great fishing can be on offer. 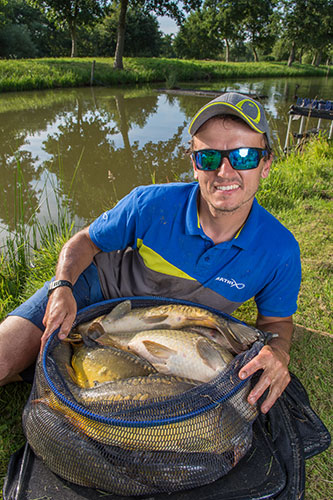 A fantastic catch and not a single big pot of bait was fed!