It’s long been known that Holland has some fantastic fishing on offer and in recent years it seems to have grown in popularity with UK anglers who are looking for an alternative to fishing commercials in the closed season. But what is on offer for the pole angler in Holland and is there really more to the country than windmills, tulips and……. Well we won’t go there! Matrix media manager Craig Butterfield has just returned from a recent trip and certainly thinks it’s worth a visit?

I love all styles of fishing but the long pole on deep natural venues for roach and bream is certainly one of my favourite. It brings back a bit of nostalgia from the days of team fishing on the Nene and Coronation Channel, back in the days when we actually caught some fish on those venues.

When I got offered the chance to go over to Holland to help film the Matrix Benelux, (Dutch and Belgian) DVD, and the venue was supposedly stuffed with bream as well as the chance of roach to over 3lb! I wasn’t really going to turn it down!

I drove down to the tunnel and half an hour later I started the 3-hour drive to Hellevoetsluis which isn’t far from Rotterdam. I met up with Hugo Van Gelder, who would be filming with me, and the two anglers Lucien De Rade and Herwin Kwint.

We rose early the next morning and arrived at the venue just as the sun edged above the distant skyline, we had chosen a spot with form in the mouth where the canal opened up into the “lake”. It looked more like the sea to me but Hugo assured me that it was in fact a lake!

The two guys tackled up and Lucien the was fishing the pole and I was keen to spend some time filming with him, with the intention of jumping on his box at the earliest available opportunity.

Craig couldn't wait to get his hands on Lucien's pole!

His bait choice was pretty much as expected, worms, casters and maggots. You can only use white maggots in Holland, which is something to remember if you ever do get the chance to fish over there. He also mixed up a bucket full of groundbait and proceeded to make up some nice big jaffas…. I liked the look of his positive approach and he explained that he would ball in the majority of his bait before potting in a few smaller balls packed with chopped worm, maggots and casters. The mix he used was very similar to what we would use in the UK and mixed 50/50 with leam and soil.

The water was incredibly clear and we could see the bottom in the edge at a depth around 1.5m, we also saw a few mullet swim past, (this just further fuelled my argument to Hugo that we were fishing in the sea)!

Looking at the rigs Lucien had set up was like going back to those days on the Nene, top 5’s 2-3g rigs, a bulk and 3 droppers. The only real sign that it was 2017 and not 1997, (other than the fact Lucien would have only have been aged three 20 years ago), was the hollow elastic running through his top kit.

After the initial bombardment of bait the swim went a bit quiet for 10-15 minutes before the fist fish of the day was in the net, a lovely Dutch roach, all 2oz of it! Not quite what I was expecting after the stories of huge 2lb+ fish.

10 minutes later though and Lucien struck into a fish that could actually pull out his elastic, and it did a fine job of it as several feet of bright orange hollow elastic was pulled from the tip as the unknown fish made a bid for freedom. I was desperate to ask Lucien if it was a roach but as the cameras were rolling I had to wait until I saw it. After a couple of minutes I saw a flash of silver in the clear water and we all knew it was a roach.

Soon the net was slipped under the biggest roach I had ever seen and Lucien proudly declared that it was over 1kg, (2lb to us Brits). I was a bit shocked, we’d been fishing less than half an hour and we already had a huge roach in the net! It took me all my time not to kick Lucien off his box there and then, but I knew I’d have to be patient before my time would come.

The next two hours passed in a wave of big bream and huge roach, it seemed that the bream would move in and Lucien would catch a few up to 6lb before another stunning roach would put in an appearance. 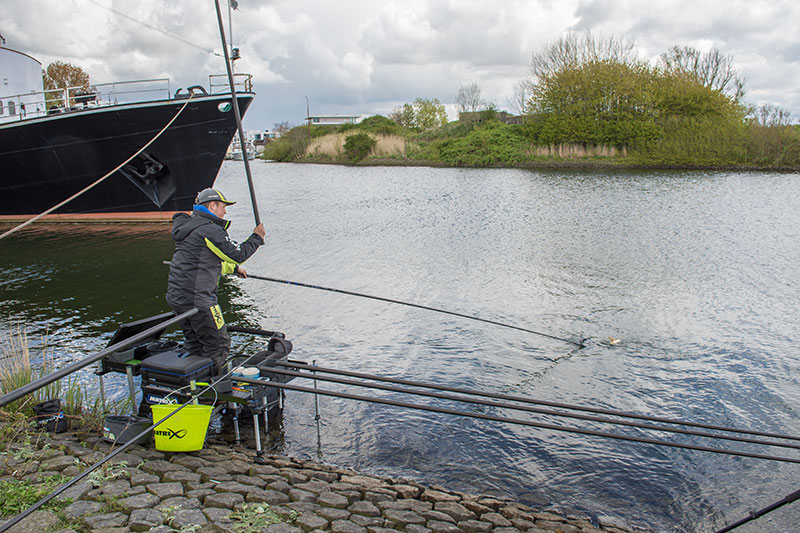 Fish were soon being netting regularly.....

Double caster on a 3g rig seemed to be the winning combination and despite the large quantity of bait put in at the start a big top up ball was needed after every couple of fish to group them back over the catching area.

Just after lunch the bailiff arrived and after a conversation with the lads in Dutch I found out we’d have to move our vans to the nearby car park. Not wanting to be thrown in a Dutch jail never to be seen again I quickly moved mine and returned to the canal and encouraged Lucien to move his. As soon as he got off his box I took position, grabbed his top kit and impaled two of the roachiest looking casters I could find onto the hook. I quickly shipped out to 13m and slowly lowered the rig in ensuring I kept it nice and straight and in my head I could see the double caster slowly falling past a big roach.

The float slowly entered the water the body sunk below the water, the tip sunk slightly into position, and then just kept going. Surely not! A firm strike was met with resistance and once again I saw that orange elastic being pulled into the clear water.

Now we all know bream plod about when hooked and whatever I was attached to certainly wasn’t plodding! My heart was racing and I was preying that it was a roach, and also that I would land it.

Lucien was still moving his van, Hugo had at this point stuck a camera in my face and started recording and I suddenly realised I didn’t have a clue what breaking strain line I was on. I was filled with both nerves and excitement as I shipped back to the top 5 and held my breath.

Several anxious moments passed before we saw the fish. We saw a burst of silver, it was a roach, and it was huge. I had now added another section and with a top six in one hand and a 4.5m landing net in the other I guided the fish to the surface and straight into the waiting net… just as Lucien appeared at the top of the bank looking far from impressed!

With shaking hands I unhooked my prize, slipped it into the net and quickly vacated Lucien’s box. I’m not sure what the words were that he mumbled when he sat down but I felt that if I could understand Dutch I wouldn’t have taken it as a compliment! 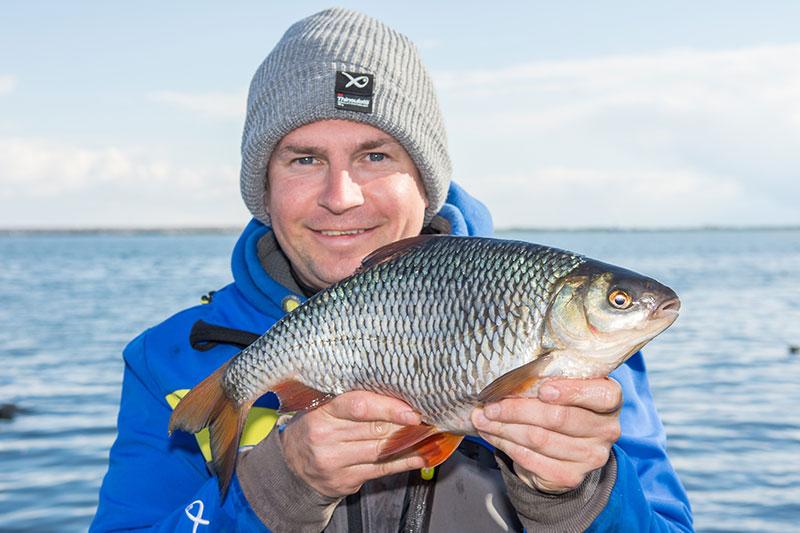 More bagging followed for the next 2 hours with Lucien putting over 40kg of big roach and bream in the net all on the long pole. The thing we all really wanted to know through was how big my monster roach was.

It tipped the scales at an amazing 3lb 4oz, a fish of a lifetime and a PB I don’t ever think I will get remotely close to topping.

So what do I think to Holland? If I had to describe it in one word it would be surreal. To catch a 3lb+ roach was obviously amazing, to see a catch of roach all topping 2lb and it being “the norm” really does sum up what fantastic fishing is on offer for the pole angler in Holland. 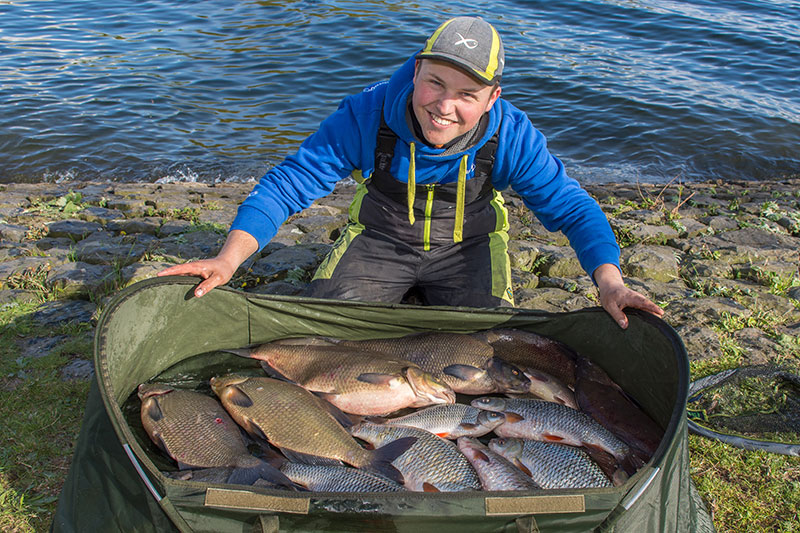