Last month saw me return to Ireland to fish the Mucknomania festival on beautiful Lough Muckno, after learning a bit about the venue last year when I managed to get in to the main prizes I was hoping this year to improve on that result using some of what I'd learnt. Once again there were a couple matches to try a few things out before the festival started and a chance to blow off some cobwebs…the Saturday Garda open and Sunday Irish open.

First up on the Garda, I drew Concra Wood 55 at the start of the narrows.. My thoughts on these two matches was to just see how much I could get away with putting in, check the stamp of fish this year and make sure my gear was ready, nothing to lose just go for it … I've gone for 13 balls laced with casters and hemp over my two pole lines then a feeder line at 30m which I've started on, pole fish were being caught quickly so I've switched and picked off roach perch and small hybrids in spells as conditions got worse to finish with 6kilo 225 and a section win and just missing out on the main frame, a nice start picking up a few euros and learnt a bit

Next up the Irish open and I've not drawn great, 119 on White Island, I had a chat with Cathal at the draw and he said no chance, after the disaster of the puncture and not being able to get the spare out the cradle on the morning...any fish caught would be a bonus, the peg plumbed up all over the place with rocks and it's mega deep on the feeder line. Long story short I pushed the peg too far and chose the wrong lines to fish, I probably should have chanced my arm fishing an all out feeder match but flat calm and bright conditions I chose the pole. I ended with 105 fish for 4kilo 770g with 6 kilo winning the section but a least I'd got a bit more of an idea in case I drew that area and how to target it 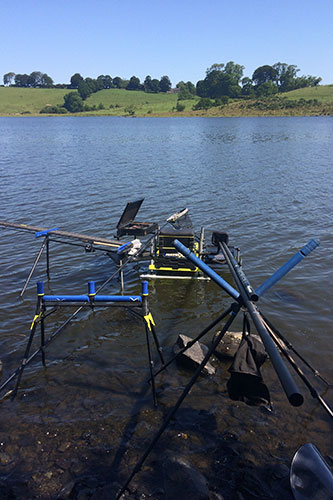 Practice sessions enabled Les to perfect his set up

On to reason why I was there, Muckno Festival Day 1

With 60 booked on, 45 anglers turned out in the end and it was a strong field with big names in it. The gear was ready I just wanted a draw and I've pulled out Concra Middle 56 next to where I was on the Saturday so I was happy enough but it wasn't going to be easy, my section included John Jowett, Steve Harwood, Julian Kendrick, Chris Simpson and Ian Dawson my next peg mate from last years festival (he was next peg again) and Mark Wainwright were in my rotation for the rest of the week.

I've gone for the same approach as the Saturday just less attacking! Half the amount of groundbait and more worms and casters loose fed than the previous days. I've caught steady all day and only lost two fish, one a good bream late on. I has 158 fish, a mix roach and hybrids, for 13kilo 225g to win the section and the match overall, a great start it but could only go one way from there. 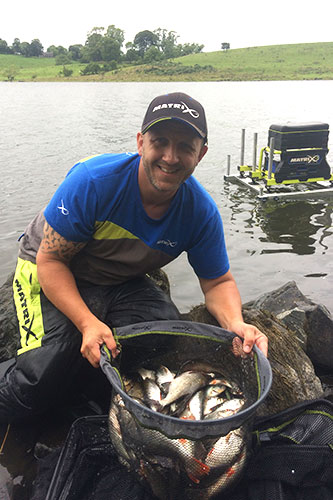 Les Started the week with some great catches

Day 2 Concra Upper peg 97 and I'm well happy, 99 is the end peg and the only thing in my mind was the section was won from the other end on the first day and this was where the hybrids were sat again. My 140 fish went 9kilo 125g with 12 kilo winning the section from peg 87. I never saw a hybrid all day, in fact only two were caught between pegs 95 And 99 but I wasn't to disappointed as this kept me in 2nd place overall going into day 3

Day 3 White Island, I wanted pegs 121 to 127 but I got peg 117 which was the peg next to my Sunday peg, high winds and torrential rain forecast all day didn’t fill me with hope for a pleasant day. I was also stuck with a big decision to make, I'm in 2nd place overall, there's a chance for bream in this area, do I go all out and risk a blowout or go for damage limitation?! I went for the latter and came in closer and found a much cleaner bottom to fish on and battled the elements to grab 127 fish, one of them a bonus hybrid, I also lost one in a snag of braid and trebles!!! My fish tipped the scales to 7kilo 425 with 15kilo and 14kilo coming from the 120s would playing safe cost me? I felt I'd made the right move as Gareth fished the feeder most of the match and had about 8kilo on the tip the rest on the pole, but I had dropped down the leaderboard and needed a better day on day 4. 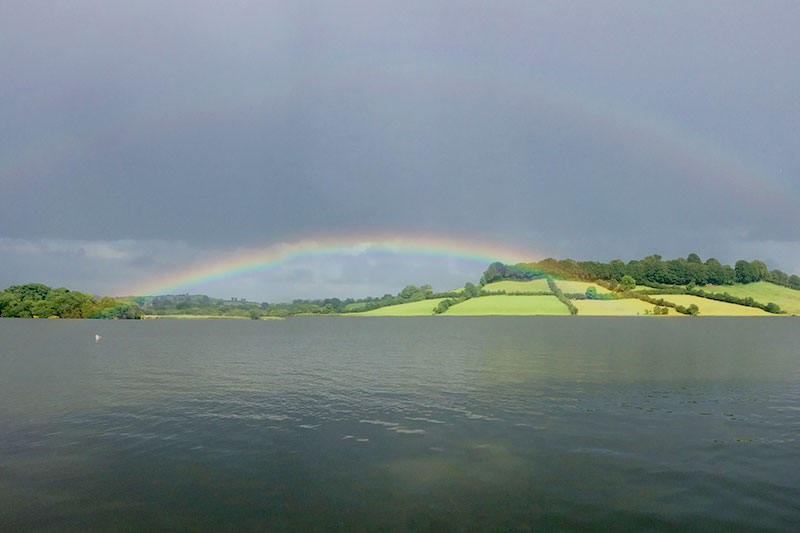 A section with a chance of a weight which I needed, I pulled out peg  218 and I balled it for a weight but the fish backed off the groundbait, six days of balling had done them in. I started making the changes and neat casters was the way forward on the short line which I started potting on the long line and it was like flicking a switch, hybrid after hybrid and skimmers perch and roach in between gave me 179 fish for 20kilo 150g. This won the section and more importantly put me back in 4th place overall with a 4 kilo lead over 5th going into the last day. Kevin Johnson, Craig Ellis and Steve Harwood were all in front of me and I needed another 20 kilo to win the festival, I needed a draw on Concra Lower on the last day but I also needed to make sure I kept my place after I'd got back in contention. 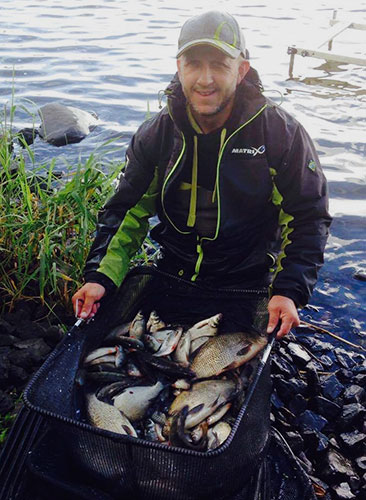 A great catch on day 4 brought Les back into contention

I didn't get the pegs I wanted that I felt might give me the weight I needed, I drew peg 20 and I knew if I could get 10 kilo that the way the wind was around the lough I would have a chance of framing. After 2 hours I felt like I was going no where, I switched to half depth at 13m and had a great run on roach then I managed to snare a few hybrids late on with some perch to finish with 142 fish for 10kilo 400

Thankfully this kept me in 4th place overall, as it turned out 7kilo would’ve been enough, and a great end to wonderful week, my decision to play safe on 117 White Island had paid off and it was confirmed after Simon Wilsmore and Darren Davis drew it after me and had 6kilo and 8kilo from it

Kevin Johnson once again put in an awesome performance to retain his title, the man is unbelievable, Steve Hardwood in 2nd place and Craig Ellis again both had great weeks with Chris Simpson and Tony Hopkins taking 5th and 6th overall. It really was a strong line up this year and it was close in the end to make the main list 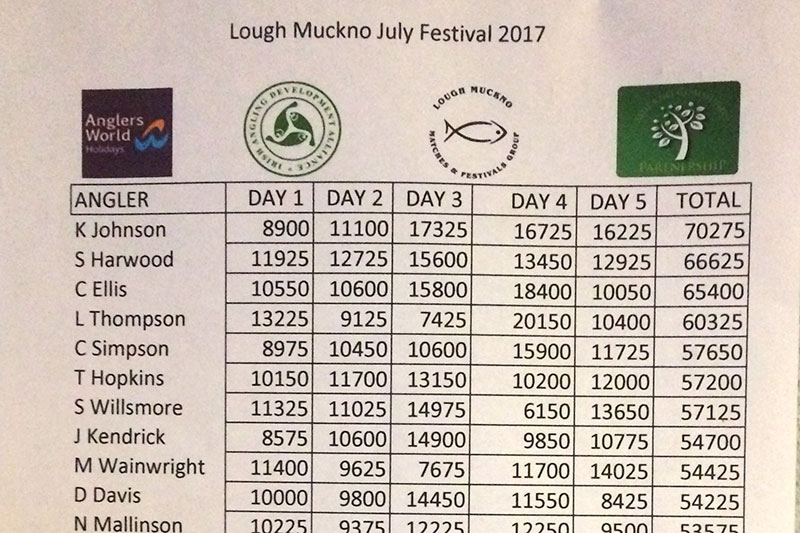 4th place amongst a field of quality anglers

The past two years now I've framed on this festival, the highlight this year being the 20 kilo day…Lough Muckno really is a magical place and if you want an Irish festival it's well worth a look! The fishing is very fair, the matches are run like clockwork by Richard, Geoff and the team, I can't thank them enough also thank you Ray at the Old Coach Inn for his hospitality providing a free meal every night during the festival. 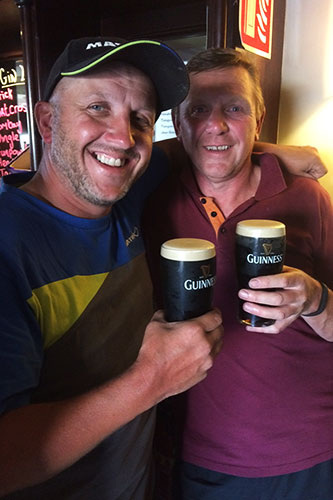 What better way to end a fantastic week