As the Matrix Brand Manager, Shaun Little is responsible for all the exciting, innovative and great looking tackle you see on this website. Things like MTX poles, the XR36 Box, Freeflow Pole Rollers and Flexi Toss Pots are ultimately all Shaun’s handiwork! He’s also a great match angler, which is one reason why Matrix products are so fit for purpose. Although he doesn’t get to fish as often as our talented team of consultants, he still wins more than his far share when he does!

We’ve joined him today for a Stopwatch feature at Packington Somers Coarse Fishery near Coventry.  He has had a win, a second and a third place in his last three visits, with weights up to 70lb, so he’s definitely on the pulse!

Today’s match is a rover, which has become a really popular at this venue over the winter. The anglers have the entire complex to pick a peg to fish so everyone should be happy with where they’ve chosen to go. So, if you like feeder fishing, pole fishing or wagger fishing, if you’d rather sit it out for big fish or build a net of smaller ones, you can hopefully choose a swim that suits. It’s a great incentive, especially in the winter! Obviously there are hot pegs that everyone would like to fish, so there is still a ‘draw’ in the morning. This decides the order that each angler gets to pick a peg.

Having a pre-match walk around the lakes and a bit of watercraft also comes into the equation. On a venue like this there are numerous ‘flyer’ pegs to choose. There is also the possibility of causing a surprise by choosing a lake or peg that no one else has considered. The draw is just about to commence, so let’s see how Shaun gets on with the extra pressure of the Club Matrix members watching his every step…

Shaun dips his hand into the bag and pulls out number four. That means he has the fourth pick out of the 17 anglers fishing. A favourable position and after a bit of deliberation he opts for peg 46 on Molands Lake. This is one of the famous swims on ‘Scarecrow Point’ and although the lake can have a reputation for being fickle, this area is more reliable than most.

“We’ve had a really hard frost this morning and there’s ice in places, so I don’t think the weights will be massive,” he explains. “If it’s a low-weight day these pegs should still be ok. There’s a chance of big carp and F1s and plenty of options, so the pole and rod can both play a part. If I can catch 30lb to 35lb I have a good chance of framing today.” 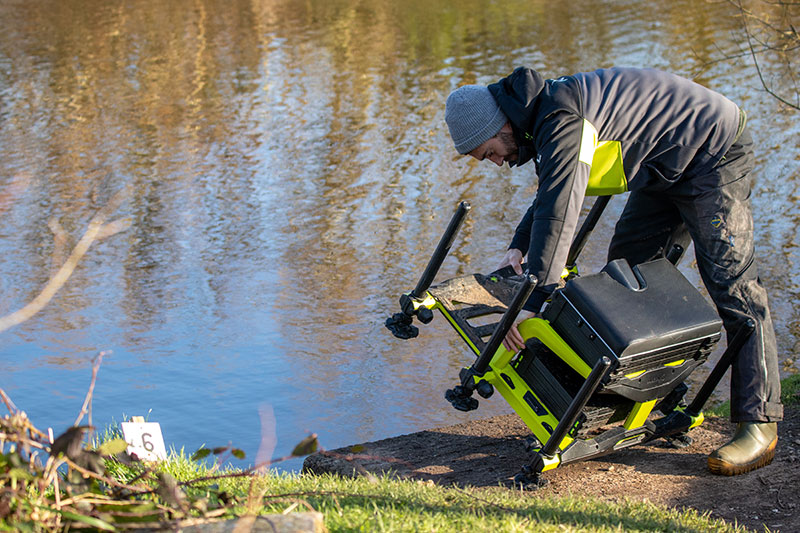 Shaun gets his XR36 box in position at peg 46 and begins to tackle up ready for the 11am start. “There’s no rush as I like to keep my fishing simple and uncomplicated,” he points out. “A bomb rod and three pole rigs are all I’m hopefully setting up.